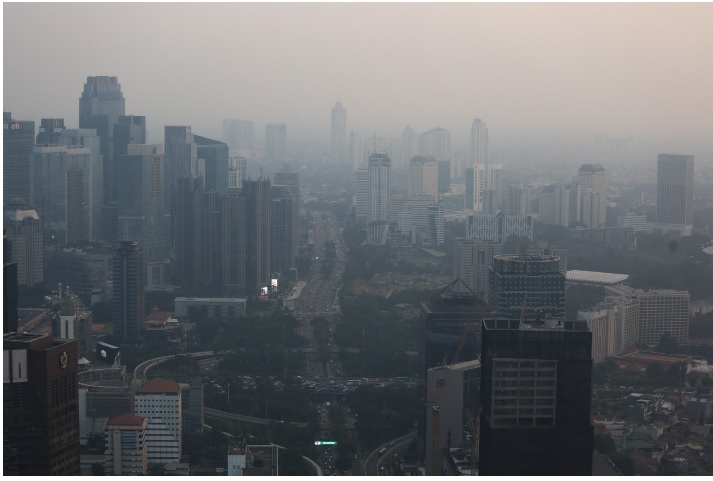 In economics, free goods like air are considered valueless. Yet in a city inhabited by more than 10 million people and surrounded by industrial areas like Jakarta, healthy air is a scarce and luxurious commodity.

In 2019, a group of Jakarta residents and several legal and environmental organizations, including the Jakarta Legal Aid Institute (LBH Jakarta), Greenpeace and the Indonesian Center for Environmental Law (ICEL), filed a citizen lawsuit against President Joko “Jokowi” Widodo, the environment and forestry minister, as well as the governors of Jakarta, West Java and Banten for their alleged negligence in creating policies to control air pollution, which has resulted in unhealthy air.

After two years, there has been no sign of when and how this judicial process will end. On June 24, a panel of judges postponed the reading of the verdict for the sixth time; this time because one of the judges had tested positive for COVID-19. The Central Jakarta District Court had been scheduled to issue the verdict on May 20.

While the delay means the citizens’ right to justice is denied, the postponement brings about overarching consequences.

Within the poor air quality level rests many aspects of human rights violations. As humans need oxygen to live, clean air becomes a necessity for our rights to live.

When the air is polluted, not only is public health harder to reach, but the unhealthy environment may also lead to other catastrophes. Therefore, if no concrete actions to stop the pollution are taken, the problem will accumulate and result in greater policy costs.

Delays of the Jakarta air pollution verdict also affect the victims of poor air quality. Time is a very decisive measure in the context of environmental litigation. The longer it takes for the dispute to be resolved, the greater the impact felt by the community because air pollution has fast, macro-spreading consequences.

In the case of the Jakarta air pollution lawsuit, the plaintiffs demand that the government reduce the city’s air pollution levels by implementing international controlling standards. Therefore, any unnecessary delays will simultaneously refrain policymakers from carrying out the necessary mitigation measures.

Moreover, the delays should give more cause for concern because in between the postponements, the Jakarta air quality set new worst-air-quality records several times. Jakarta’s air quality stood at unhealthy levels for several days even despite the mobility restrictions to contain the spread of COVID-19.

The adage “justice delayed is justice denied” did come true, as in between those delays, many unnoticed victims continued to suffer from the worsening air quality.

The pandemic should provide an opportunity to reform almost all public service sectors, which in general, manifests in the shift to digitalization.

In the judicial power, district courts have migrated to online services to prevent virus transmission. Litigation sessions, including the Jakarta air pollution lawsuit, have been held digitally. Such a sense of transformation is urgently needed for people accessing court services, knowing how ineffective offline court sessions used to be.

In the public sector, the socalled reform only occurs partially. Rather than speed up the delivery of public services, reform measures were initiated to make it easier for bureaucrats to work during the pandemic.

The norm that requires the public to pay for services they seek has remained unchanged: The public is asked to follow the bureaucrats’ convenience, not the other way around. Professional bureaucracy, on the other hand, is characterized by the bureaucrats who adapt to the convenience of the public so that they do not receive any slightest decrease in the quality of service they are entitled to.

Sadly, the Central Jakarta District Court’s bureaucracy does not subscribe to professionalism as in the case of the air pollution lawsuit. The plaintiffs have been forced to accept “unprofessional” reasons for the delay of the verdict. Once, the hearing was postponed because one of the judges was commemorating the 40th day of a relative’s death.

Although grief is morally understandable, it is difficult to tolerate it as a professional excuse, especially when such a pretext recurs. The hearing was later delayed for two weeks because another judge was mourning the death of his relative.

The lack of professionalism also unfolded when technicalities forced another delay of the court hearing. At one time, the hearing was rescheduled because the court clerks had not finished typing the verdict document. Other reasons included poor internet connection and incomplete documents that the judges had to read.

The repeated impediments somehow reveal the court did not take mitigation efforts to prevent the problems from happening. They also suggest that such technical or private obstacles highly affect the professionalism of our court bureaucrats.

The air pollution lawsuit has now been in limbo for two years — and counting. There may also be the possibility of further legal remedies such as appeals and cassation. Even then, an extraordinary legal remedy like a judicial review is an available option to prolong the battle for environmental justice.

In fact, the dispute resolution can be found upon the government’s goodwill: The government can make it simple by taking immediate action to reduce air pollution in Jakarta. The public, however, has all the reasons to be skeptical, because in past environmental litigations, the government refused to lose face and opted to fight till the end.

Unless the legal uncertainty lingers, Jakartans will have to continue fighting the city’s unhealthy air.